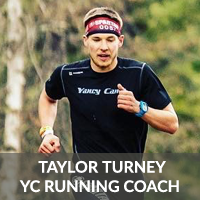 Mountain Athlete and Running Coach Taylor Turney has collaborated with Yancy Culp to create a comprehensive training program for trail and mountain running.

Weekly updated online access to 3 workouts programmed by Yancy & Taylor, plus bonus workouts. Mountain Athlete and Running Coach Taylor Turney has collaborated with Yancy Culp to create a comprehensive training program for trail and mountain running. This program combines proven running principles with plyometric bodyweight training to build the agility and endurance to tackle even the most rugged terrain. Beginner and advanced scaling options. All workouts are written in a way that allow you to easily scale them down to meet your fitness level.
Fitness & Challenge Testing Program. After registering you’ll complete fitness tests programmed by Yancy & Taylor and log your results in your online Yancy Camp fitness test tracking system. Anytime you re-test you’ll log your new results so you can keep track of your progression over time. *Challenge Testing can be completed whenever you’d like – invite a friend!
Scoreboard Program – if you choose, you can mark your Fitness & Challenge results “Public” your results will populate to our “Scoreboard” that can be viewed by yourself and anyone who visits the site. This provides you with the opportunity to see how you compare to other athletes as well as motivation to stay consistent with your training which will result in improved scores.
Access to our private Facebook group called – Yancy Camp Athletes & Coaches where you can post training, racing, competition, nutrition, gear, life, and any other questions you might have. Your nutrition questions will be answered by one of our Registered Dietitians who have strong resumes in the world of Sports Performance Nutrition.
Unlimited Q/A with Taylor and Yancy through private messaging on Taylor or Yancy’s Instagram @tridgerunner, @yancyculp, @yancycampofficial, Facebook @YancyCamp, or by email – TaylorTurney@YancyCamp.com / YancyCulp@YancyCamp.com email. The closed Facebook group is a great place to post general questions for all members to see but if you have private questions you’d like to ask, always feel free to send Yancy or Taylor a message.
Video library that will provide visuals for programmed exercises.
Our goal with this program is to provide you with a running program provided by an Elite level Trail & Mountain Athlete/Coach that helps you bring more structure to your training. Training time is precious and maximizing your time to help you reach your goals is our goal! If you’re a trail/track/road runner or OCR athlete looking to take your training to the next level, this program is for you! We’re confident you’ll enjoy the program and the results, and we provide it all for only $29/month.
Your membership is month to month recurring charge with no contract, and you can cancel any time without question.

Rules: Competitors are not allowed to grab the handrails or any other portions of the treadmill for assistance during 15 min.
Score: Total distance covered once the treadmill timer hits the 15 minute mark.

Taylor is a young family man from Alaska who loves training in the mountains. As a developing athlete, he competed in many different sports until turning to endurance events in 2012. He was purely focused on training to run fast, until his wife Kristyn introduced him to OCR in 2015. Since then, he has combined his love for running and playing in the outdoors as a mountain athlete and member of the spartan pro team.

Since 2013, he has spent countless hours pouring over training methodologies from the world's best coaches, athletes, and scientists. He also learned under some of the nations most successful coaches during his collegiate running career at Colorado School of Mines & University of Alaska Anchorage. He applies this knowledge through a purpose driven approach to training that has allowed himself and the athletes he mentors to achieve big goals. He has been coaching athletes to personal bests since 2015, and officially launched his personal coaching business, Redox Running, in 2018. Combined with Yancy Culp who was a Texas HS state medalist in the 1600m, received a scholarship to run for the University of North Texas, and now in his late 40’s has continued competing and coaching in running and now obstacle course racing throughout his life. Taylor and Yancy both are passionate about helping all levels or runners enjoy the many joys that come from a life filled with running.

Some of Taylor's recent accomplishments include: