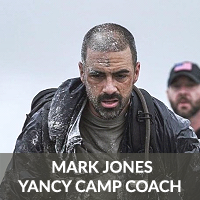 Coach Mark Jones is ‘Always Ready’ to jump in and tackle anything and everything his mind and body is called to do.  Our goal with this program is to help you take charge of your fitness in a way that works into your busy lifestyle while also helping you get to where you’re also ‘Always Ready’.

• Weekly updated online access to 3 workouts being performed by Mark plus 1-2 bonus workouts each week. *All workouts are written in a way that allow them to be easily scaled down if needed.
• Fitness & Challenge Testing Program. You’ll complete the Fitness Testing and log your results within the first few weeks after registering. Periodically you’ll re-test and log so you can keep track of your improvements. *Challenge Testing can be completed whenever you’d like – invite a friend!
• Scoreboard Program – if you choose, you can mark your Fitness & Challenge results 'Public' and your results will populate to our 'Scoreboard' that can be viewed by yourself and anyone who visits the site. This provides you with the opportunity to see how you compare to other Yancy Camp athletes as well as motivation to stay consistent with your training which will result in improved scores.
• Access to our private Facebook group called – Yancy Camp OCR Athletes & Coaches where you can reach Mark & Yancy anytime you’d like. Post nutrition, training, racing, gear, life, and any other questions you might have. Your nutrition questions will be answered by one of our Registered Dietitians who have strong resumes in the world of Sports Performance Nutrition.
• Unlimited Q/A with Mark & Yancy through private messaging through Instagram - @woodpile_jones & @yancyculp. The closed Facebook group can be a great place to post general questions for all members to see but if you have private questions you’d like to ask, always feel free to send Mark or Yancy a private message.
• Video library that helps describe programmed exercises you may not know how to perform as well as other informational videos.

• Our goal with this program is to provide you with a training program that helps get you 'Always Ready'; that’ll keep you 'Always Ready'. There are many of you who have accomplished a lot in the world of OCR, running, and general fitness, and you naturally want to graduate up to more challenging competitions. Mark will help get you ready. We’re confident you’ll enjoy the program and the results, and we provide it all for only $29/month.
Your membership is month to month recurring charge, and you can cancel any time without question.

This test is performed on a treadmill that will incline up to 15% incline.
Athlete starts the test at 0% incline.
At every 1min mark, athlete increases incline 1%.
When athlete reaches 15min (the 15th minute will be at 15% incline) the test ends.
Total distance covered in miles is the athletes score for this test.

Athlete can use a 30lb ruck, sandbag, sandbell, or other 30 pound weight implement
Movement standards – chest must touch the weight & full press above the head is required for every repetition. *A jump off the ground is not required.

Mark Jones/ Coach of Yancy Camp Always Ready Training
Mark Jones has arguably one of the most well-rounded race resumes and accomplishments on the planet. It’s a resume that I would argue puts him in a select category of humans I call the world’s most well-rounded athletes. He has competed and excelled in races lasting less than 20min to races lasting 2.5+ days. He has competed in and some cases won some of OCR and Adventure Racing longest and toughest challenges in the world like World’s Toughest Mudder (multiple wins, Spartan Death Race (multiple wins), Texas Water Safari, Go Ruck Selection – 2019 Finisher & Go Ruck Team Assessment 2019 winner, 150 mile trail, 2:50 marathoner in 2018, and numerous other accomplishments in trail running, road running, OCR, and adventure racing. Mark has also served in the Marine Corps and Army since 2000 and has earned numerous commendations throughout his time serving our country. *Please take the time to view Mark’s entire race/competition and military resume/bio. It’s a jaw dropping body of work! Long story short, Mark Jones is ‘Always Ready’ to jump in and tackle anything and everything his mind and body is called to do. Our goal with this program is to help you take charge of your fitness in a way that works into your busy lifestyle while also helping you get to where you’re also ‘always ready’.

After his tour with the Marine Corps, he was employed as an Ironworker. During this time, he pursued a Bachelor’s degree at Muhlenberg College and enlisted with the Army National Guard in 2006. In 2009, he was deployed to Tarmiyah, Iraq with the 56th Stryker Brigade and was awarded a Combat Infantry Badge.

With each new team, he has been awarded Certificates of Commendation, top honors for our Country, and has built relations with our wounded Veterans.

Sergeant First Class Jones currently resides in Colorado Springs, CO. He is still in the Army National Guard and serves as a race director, advisor, coordinator, and student in completion of his Masters in Project Management.